It's been a little while--okay, years--since my last update.  I have been writing, but have also been busier than usual with real life (i.e., trying to keep from losing my mind).

This year, I had a story called "Highway Star" in Near to the Knuckles' GLOVES OFF anthology.  You can purchase it at amazon:  GLOVES OFF

My poem "feet," first non-lyrical work published as Katharine Hepcat, is up at Thirteen Myna Birds.  Juliet rotates the poems every thirty days, so hurry if you want to read it.

I also had a poem called "with carol at the switchhouse," inspired by the writing of a friend, which has been archived on my contributor's page at The Camel Saloon

I think there were a couple more earlier in the year.  Have to check.  Anyhow, that's what I'm sure of off the top of my head.

I was asked to review a brilliant graphic novel to be published soon.  Waiting to have a question answered by the publisher.  I'll post the review at my new umbrella site, katharinehepcat.com, where I plan to collate all things Katharine Hepcat/Walter Conley (writing, art, music) from this point on.

In the fall, I'm going to have an e-book published--the house's debut into the world of electronic readers.  It's an oldschool noir/horror story triggered by a help wanted sign.  I'm very excited about this, but can't say much more now.  This will likely be my last work published under the name Walter Conley.  I've used various pen names over the years, but am going to do all future projects as Katharine Hepcat (unless I have a specific request to the contrary).  There are links on the new site to related social media accounts.

Though I've always been a proponent of genre fiction, as a reader and a writer, I may be edging away from it to explore some new terrain.


Posted by walter conley at 5:42 AM No comments:

I have a piece called "Ray" in the one-year anniversary issue of Aleathia Drehmer's IN BETWEEN ALTERED STATES. Ray first appeared in a story I wrote for Opi8. He has since shown up in a screenplay and a group of tales centered around a diner. In my opinion, Ray is the most terrifying character I've ever created (by the time you notice him, it's already too late and you'd better hope you're not the person he's looking for)....

I also have a little poem called "Stardust" in Blossoms, a mini-zine edited by Aleathia's daughter. Can't wait to receive it.

I've cut back on writing and submitting work to focus upon music, but will have more new poetry up soon at Sex and Murder Magazine, Gloom Cupboard and Phantom Kangaroo.
Posted by walter conley at 4:07 AM 2 comments:

I have a short story called "Kick Head Kimberly" at Pulp Metal Magazine. Part of the Candy Sangria Experience.

My poetry collection, OUR SECRET END, is in the works. It'll be published overseas, but available online and in the US, as well.

After it comes out and I post FLASHDRIVE 2, I may teach myself Mandarin Chinese and write music for a while. Or just speak Mandarin, since it's as beautiful as any music I've ever heard.
Posted by walter conley at 4:08 AM No comments:

My poem "descent" is up at The Camel Saloon:

My own favorite of the desert poems I've written. The road described is one I took almost daily when I was out in CA. They have some wonderful poetry at The Camel Saloon. Glad I happened upon it.

FLASHDRIVE 2, the next disenthralled e-book, is coming along. Two stories to go and I've been in touch with the photographer. Still on track for a May 1 posting.

I picked up some audio mixing/recording software and may put together a radio drama. I haven't written or recorded any complete songs in a while, so that's also a possibility.
Posted by walter conley at 4:49 AM No comments:

BACK IN BLACK AND HERE

I have a poem called "re-animate-her" at Mad Swirl:

My first piece for them. I had no idea that you become a regular once you have three poems there. Hmmm. Would they take a poem about unseen electronic bird-gods? Would anyone?

I also posted a story of mine called "Last Stop, Dullsville" at issuu, along with some of the Paul Dutra photography that inspired it. Forget to mention it here. You have to be a member or issuu--free and easy--since it's correctly tagged unsuitable for children:

I'm about to post a new disenthralled issuu e-book. Two stories by a writer who appeared in one of the regular issues and a cover by a photographer new to us. By us, once again, I mean me. Possibly today.
Posted by walter conley at 6:28 AM 1 comment:

I have a new story up, "Evan," at Nefarious Muse. It's all true but the detail I added to frame it into a story:

Yesterday I did a pen-and-ink portrait of Henry Cooper, based on a photo of him taken after he'd gone five rounds with Muhammad Ali. It's my new profile pic at faceplant. I really like working with pigment pens and india ink--a mixture of drawing and painting. The results are gritty and suit my colorblindess and predilection for B&W.
Posted by walter conley at 5:42 AM 1 comment:

I have a new poem, "underspace," in issue #5 of Phantom Kangaroo. My first time appearing there. Nice site, good company to be in....

I should have a story or two up soon, maybe a comic.

Wrote half a story this morning. I usually bang them out in a sitting, but I want to let this one stew, under the lid, for another day before I wrap it up.
Posted by walter conley at 7:51 AM No comments: 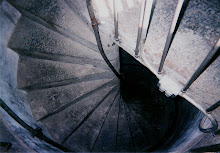